They know that to provide value for their customers, they need to match them with the right talent with the right skillset at the right time. So it’s no surprise that they expect the same from their sales information.

Recently, Andela turned to Troops for help getting information in front of the right people when it was most useful. With the visibility our workflows provided, Andela. . .

We spoke with Valerie Papa, revenue operations manager at Andela, about how Troops workflows have empowered their go-to-market teams.

Valerie enjoys working in a rev ops role as it gives her a perspective on how the company operates as a whole. With that context, she can hone in on specific systems, making sure they play well together and function with ease. Her goal is to create a well-oiled machine that is repeatable, scalable, and efficient.

To help empower Andela’s new SDRs, Valerie created a new Slack channel dedicated to tracking every new meeting they scheduled. Now, every time an SDR books a meeting with a new deal, Troops fires off an alert to the channel with key information, like company name, annual revenue, industry, and who plans to attend. This gives the entire company visibility into upcoming opportunities at a glance. 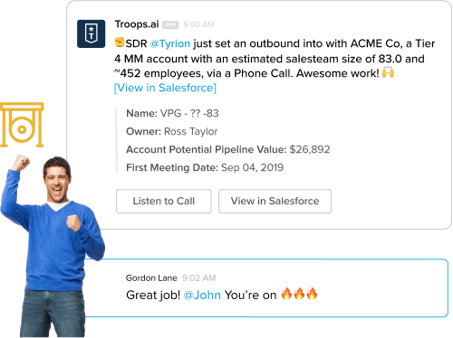 Andela’s SDR team experienced an immediate lift of 10% in meetings booked, and an overall increase of 46% as they grew the team and its use of Troops. The improved visibility also increased the team’s excitement around some of the new prospects. Managers, directors, and executives started chiming in, and SDRs felt more motivated as they saw their hard work recognized by the rest of the company.

Many departments touch a deal as it moves through Andela’s sales cycle. Rallying those different experts around each deal as it progressed through the sales pipeline wasn’t easy to do. Valerie needed a way to simplify their collaborative process to bring in the right people at the right time with the least amount of effort.

She found that solution in Troops Deal Rooms.

Now, all new deals get a Deal Room or a dedicated channel in Slack, so the entire team can quickly see updates and collaborate throughout the sales cycle. Troops automatically brings in the deal’s direct manager, so they can provide guidance to the sales rep about negotiation tactics or discounts. Later on, as the deal requires input from Andela’s technical, legal, or systems teams, Troops automatically adds the appropriate people into the Deal Room for quick collaboration.

With Deal Rooms, Andela shortened their sales cycle to about 90 days. They’ve also experienced better sales conversations now that multiple experts have a chance to weigh in with their advice.

Deal Rooms ensure each opportunity gets the tech discovery it needs. They also simplify the approval process by bringing together all the necessary executive and financial stakeholders.

Andela took a more proactive approach to avert churn with Troops. To get more eyes on at-risk customers, Valerie created a churn-specific channel in Slack and set up Troops alerts to signal when a customer was in danger of churning.

Now, if a customer is on the cusp of leaving Andela, Troops sends an alert to the channel along with information about why the customer is at risk. This allows the team to collaborate on ways to prevent the customer from churning before it’s too late. 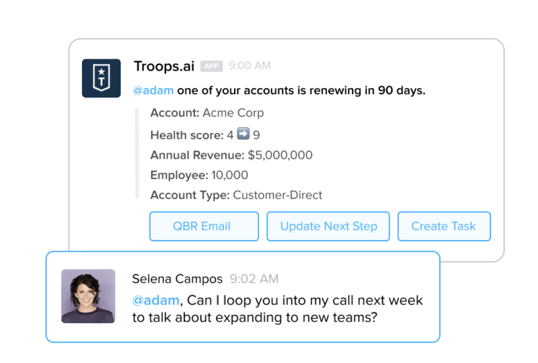 Valerie also created a separate “churn down for what?” channel in Slack to track at-risk cases that were saved. Troops automatically updates the channel with an alert whenever a customer who was close to churn decides to stick with Andela. These alerts identify the customer and how much MRR was saved. Once the alert goes out, the person in charge of the at-risk customer follows up, telling the story of how the deal was saved.

These workflows helped Andela increase the number of deals saved from churn. They gave the team more visibility into which engagements weren’t working out and why. With that visibility, sales and customer success worked together to come up with ideas and make suggestions to retain more customers. Executives got involved too, offering air cover or leveraging their networks to make a difference.

Andela also used these alerts to recognize the people who helped save at-risk accounts. They’d shout out an engineering manager for providing technical support or someone from legal for helping facilitate credits. This made the entire Andela team feel better supported, recognized, and like they could make a real impact on the company.

One of Andela’s main challenges was understanding what the market demands at the moment were, so they could recruit the right engineering talent.

They used to develop engineers in-house until they reached a senior-enough level to meet customer needs. However, Andela’s customers always sought very senior, qualified engineers, so in-house development took a lot of time and money.

To overcome this challenge, they needed to maintain a clear understanding of what types of engineers the market wanted at all times. They knew that by tracking which of their deals moved the fastest and which engineers met the skillsets those deals needed, Andela could map their talent recruitment to better serve the market. Andela achieved this go-to-market agility thanks to the visibility provided by Troops workflows.

For example, Valerie created a closed-lost workflow to track which deals slipped through their hands and why. She also created a hot deal workflow that triggered whenever a fast-moving opportunity entered the last two or three stages of the sales process, so the staffing team could match the deal with a suitable engineer.

The closed-lost workflow gave Andela’s entire team real-time visibility into which deals they were losing and why. They used this information to improve their positioning and adjust their recruitment to better suit their customers’ needs.

This workflow also improved Andela’s data quality. Valerie discovered that when a closed-lost alert went out on Slack, people started asking why they lost the deal. This prompted sales reps to add that information to Salesforce, allowing everyone to access the details and learn from the loss.

The hot deal workflow, on the other hand, allowed the staffing team to take a proactive approach to managing opportunities. When they received a hot deal alert, they looked at the deal’s technical needs to make sure they had the engineers to match the desired skillsets. If they didn’t have a good fit, they had the time to find that person.

This visibility helped Andela’s team stay on top of the shifting market to meet their customers’ needs.

Troops gave Andela the visibility they needed to be more productive, collaborative, and agile around their most important deals.

Productivity: Troops made the entire team aware of how their deals were progressing through their sales pipeline. This encouraged sales reps to stay on top of their deals and push to bring in more opportunities.

Collaboration: Everyone at Andela got involved in sales, thanks to Troops. Deal Rooms brought in the right people across departments when it made the most sense, shortening Andela’s sales cycle. Churn alerts encouraged everyone to put their minds to work helping at-risk deals, so they had a better chance of saving them.

Go-to-market agility: Valerie and the Andela team no longer had to go digging for the market insights they needed to meet shifting customer needs. Troops surfaced all the information necessary to proactively respond to market trends.

You can hear more about Andela's approach to revenue operations from Valerie on our RevOps Webinar or click here to learn more about how your team can benefit from Troops. 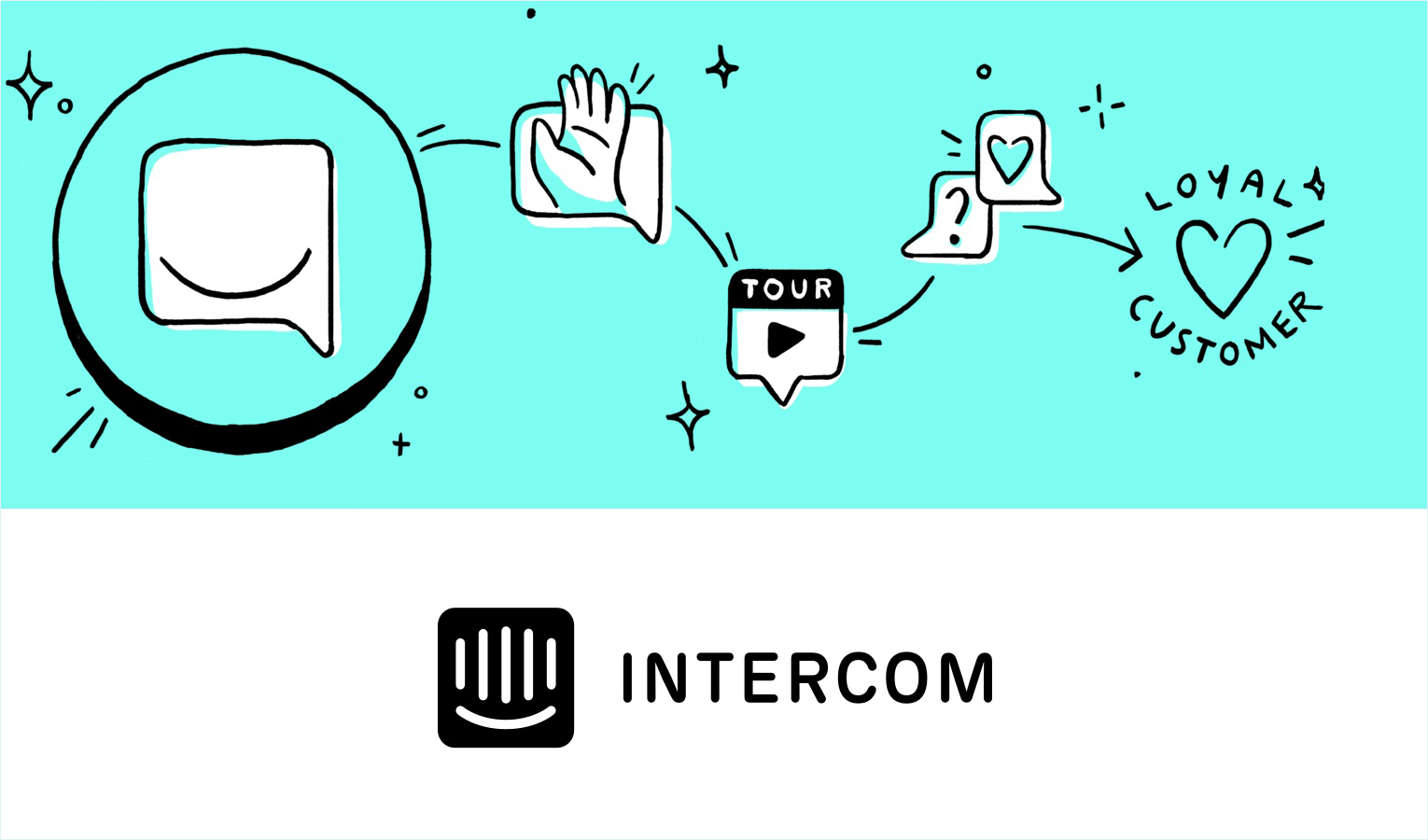 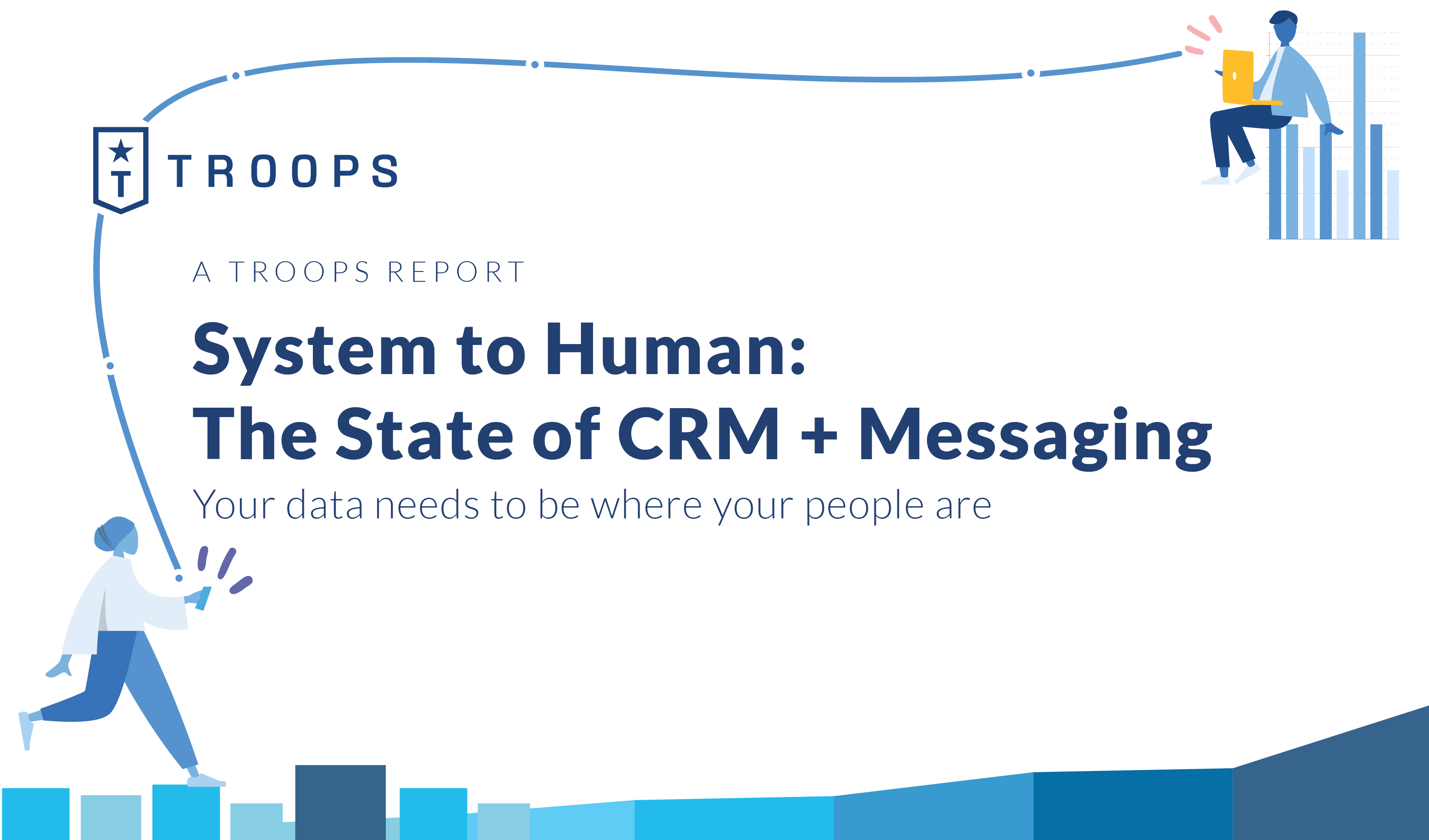