How to Drive Executive Engagement in Key Sales Conversations 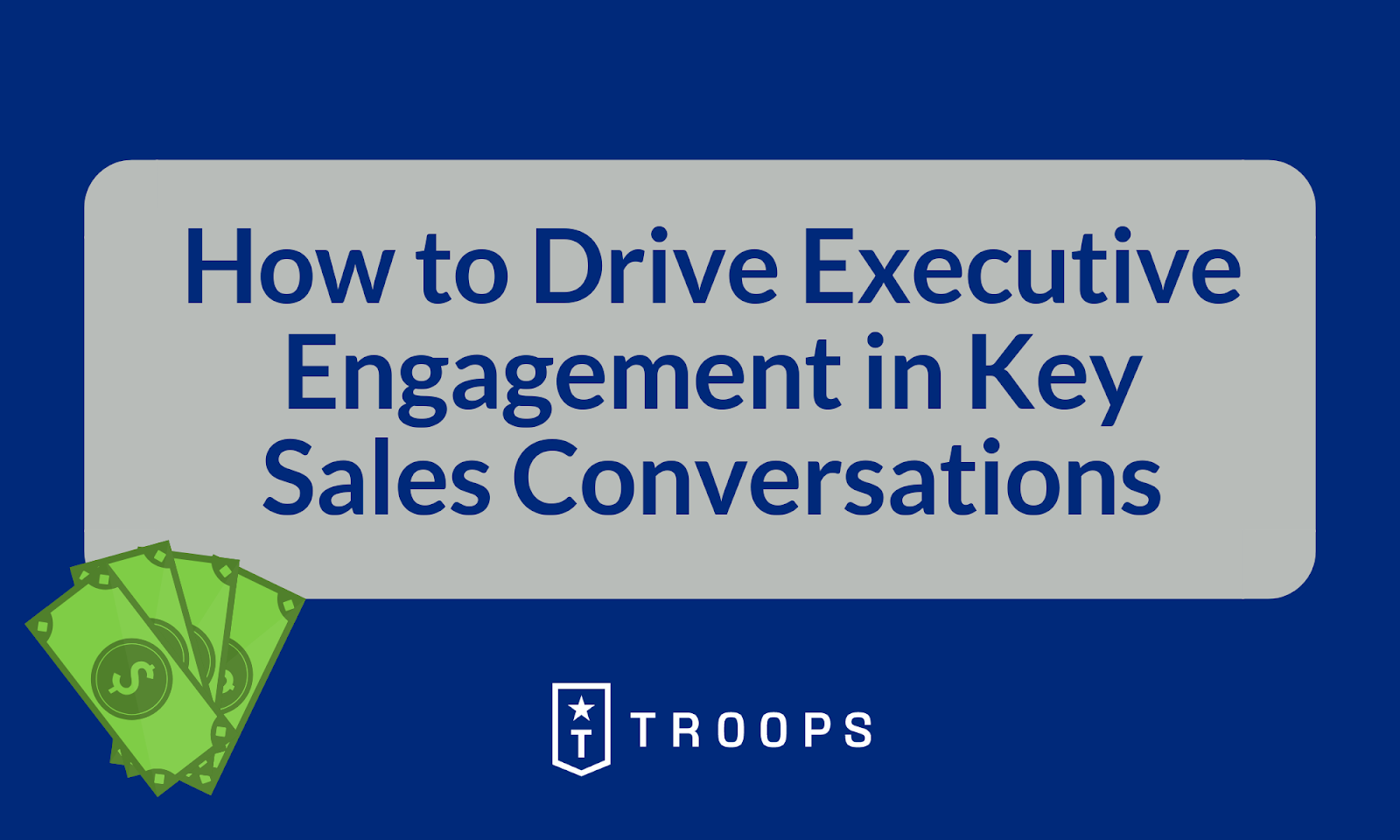 When executives assist on a deal, good things happen. People love to talk to someone in power and often they are able to elevate the conversation to the right people, with the right talk track.

But knowing which deals to help with and when to offer that help isn’t something an executive should have to juggle.

Say an exec oversees 8 sales reps and each of those reps have 20-25 deals in the works—not an unusual number. That’s at least 200 conversations, all in different stages.

Tracking that much data in Salesforce is a recipe for overwhelm. It’s not an effective use of anyone’s time, let alone a busy executive with a million things to think about.

The key to executive engagement is reducing friction to help executives easily step in when they can influence a deal. Across the fastest growing sales organizations, we’ve seen this happen in two primary ways:

In short, the executive shouldn’t be the one to decide when to assist on a deal. Instead, the sales team should have an established framework in place for involving executives in deals.

In this article, we’ll cover both effective approaches along with best practices for implementing each.

Apply a Structure for Exec Engagement in One-on-One Meetings

Most sales teams use one-on-one meetings with frontline managers for an “opportunity deep dive.”

If you show executives a full pipeline of 15+ opportunities, it’s too much cognitive overload and potential research for them to exercise their full resources and influence an opportunity.

To head off reps who think all their deals are urgent, restrict them to bringing their top 3-5 deals in a given one-on-one. Make it a structured part of your conversation for them to bring you these opportunities every week.

Most of the time, that means focusing on the deals with the highest potential revenue or which are most likely to close. If they have a deal in trouble that could be salvaged by an executive touch, they should bring that to your attention as well.

You probably won’t need to move on every deal they bring before you. But this method means you’re in the loop concerning the most important deals your team is handling.

Use the Likely to Spend Framework

Another way to have reps initiate executive involvement is through a questionnaire organized around which opportunities are likely to spend.

One VP of Sales we know asks these questions in the questionnaire: 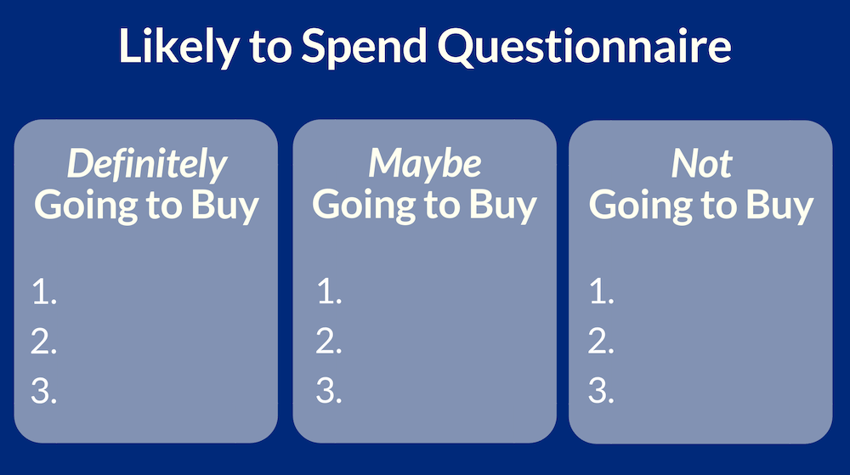 Their responses can help execs understand which opportunities to move on, then dig into their networks to elevate the conversation, create additional threads, or find a customer reference. That process helps executives make the biggest impact on the most important 10-20 accounts across the team.

Option 2: Use Automation to Move on High-Value Deals

The benefit to using one-on-ones and direct communication with your reps is that you can discuss high priority deals in the moment. The downside is that it’s easier to miss important deals if your reps are running behind, call in sick, or leave the company.

That’s where automation comes in.

The information you need to determine whether a deal is ready for involvement usually already exists in Salesforce.

With automation, you can build out a process for executive visibility into high priority deals. By using Troops, you can easily setup Slack notifications every time a deal reaches a certain stage at a certain size. 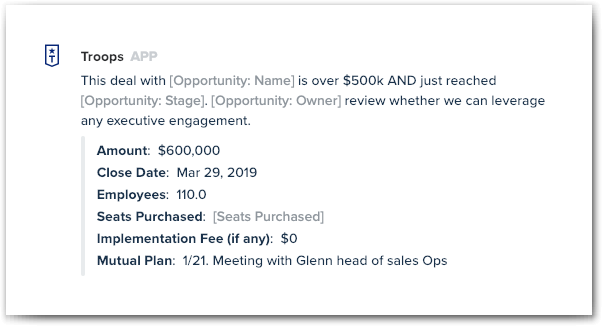 Interested in driving executive engagement using automation for your team? Get started for free here.

Going further, you could have a task created for the account executive on that deal to reach out to the CEO of your company, VP of Sales, or whomever else wants to get involved with these deals.

The effect? Executives know immediately if there’s a deal in the works they should get involved with.

We find this works best when you dynamically connect executives with reps instantaneously so they can quickly sync up on context if need be.

Whether you initially rely on rep participation or automation to spur executive engagement, the job is hardly over once you’ve identified an opportunity for an executive to influence a deal outcome. This is really only step one!

The best results occur when executives can continuously monitor and engage in  conversations around these top accounts and opportunities. This not only gives them the opportunity to provide ongoing help, but also reinforces how helpful they can be which will encourage future behavior.

Earlier in our research on the most popular sales slack channels, we revealed that a staggering 70% of companies are creating dedicated channels related to specific opportunities or customers.

These channels organize people and communication across the company to provide updates on specific deals, tap into the collective knowledge of the company, and maximize the chance of winning or expanding a deal.

Once this motion is in place, the best companies leverage automation to provide real time updates on a deal so that everyone from executives to front line managers can have a constant pulse on what is happening...and when they can help.

Providing a passive way to consume key deal updates where your exec team is already spending time is by far the easiest way to facilitate ongoing executive engagement. This is one reason why we are so bullish on account-based channels and continue to see this as a best practices for sales teams on Slack.

When to Make Your Move

How often you assist on deals depends on your executive leadership style and a realistic assessment of how much time you can spare.

Maybe you get involved when your reps are stuck talking to middle management. Maybe you jump on a call so that your team gets access to the prospect’s CEO or COO. Or maybe you just help with strategy behind the scenes.

But it’s hard to take action when you don’t know which deals are worth your time.

By empowering your team to bring forward opportunities along with using automation to ensure that you have visibility into key sales conversations, you can be confident that the choice of when and where to help is always yours. 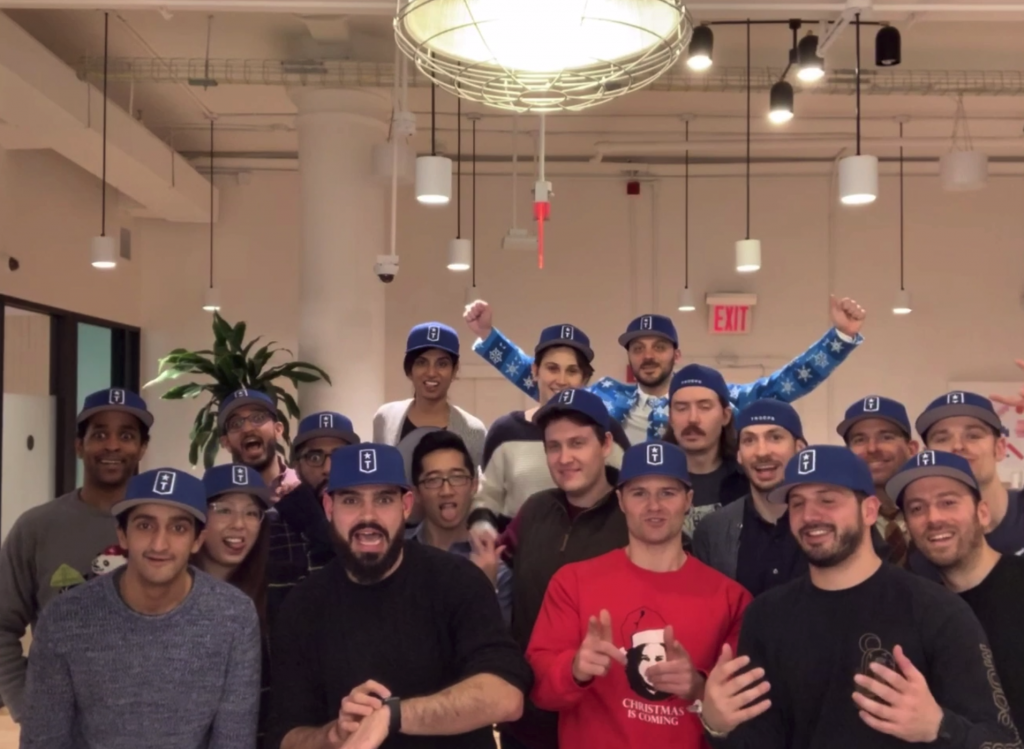 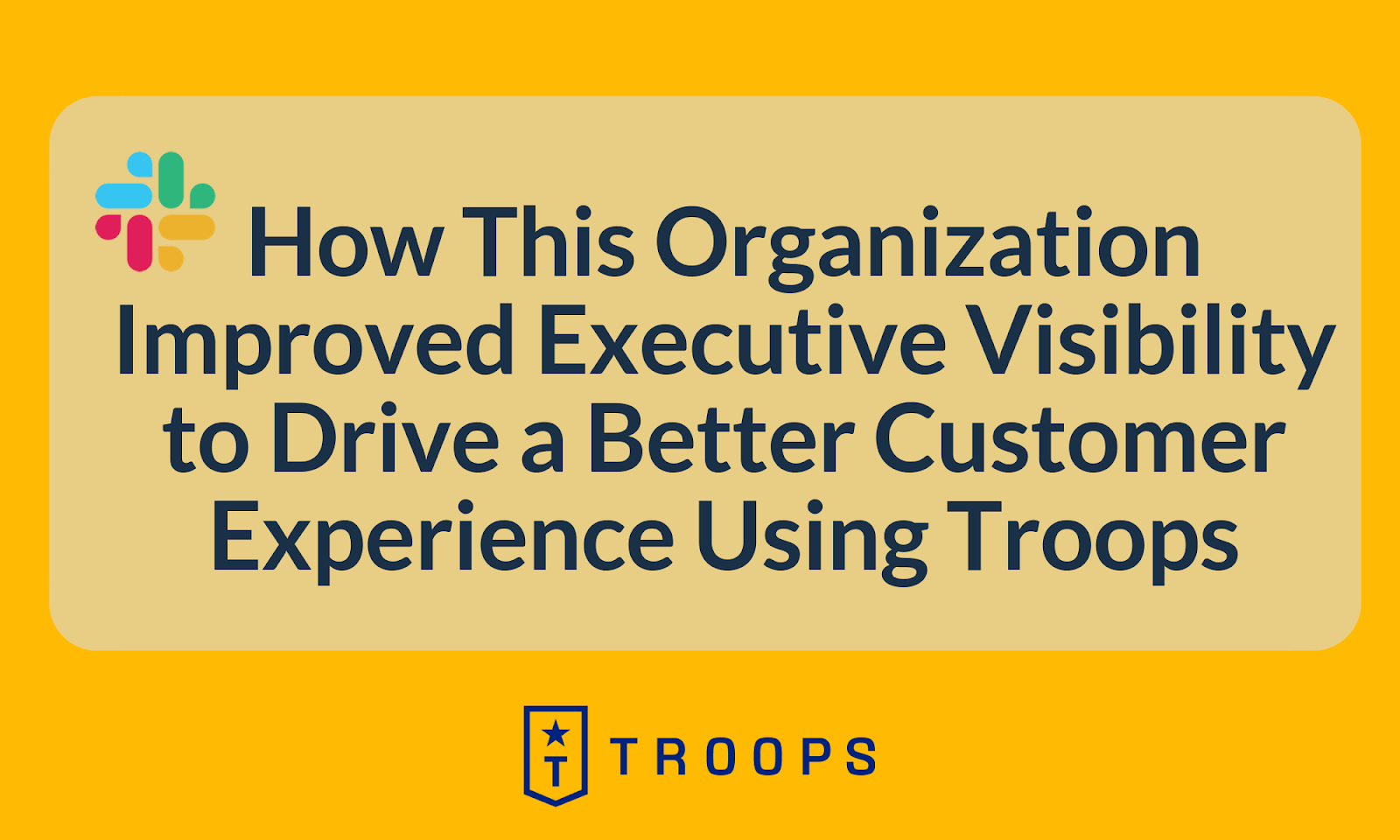