Common Sales Communication Mistakes and How to Avoid Them

I’d be lying if I didn’t utter Homer Simpson’s favorite phrase after realizing that I’ve made one of the common sales communication blunders we’re about to outline below.

I’ve also been on the other side of these plenty of times and it’s never a good look.

We’ve been through some good habits of successful salespeople and sales styles for tough conversations, but today’s post outlines some very common sales communication miscues and how to avoid them. Although many of these may seem trivial, all it takes is one bad impression to turn someone off and ultimately miss out on closing a deal.

Addressing Someone By Their Roll Call Name

Not many people know this, but my real name is Joseph Scott Britton Jr.

I’ve been called my middle name since I was born because I’m a Jr. In fact, the only time I really ever got called Joseph was in elementary school on the first day of school or when we had a substitute teacher who’d blindly rattle off the names on an attendance sheet as they appear.

Interestingly enough, I see this phenomena of addressing someone by their roll call name happen all the time in outbound campaigns.

Someone’s LinkedIn might say Thomas, Joseph, or Daniel, so SDRs use that as their [First Name] field in a new campaign even though these prospects might go by Tom, Joe, and Dan.

What do you think the signal is when someone receives an email addressed to their roll call name which no one calls them by?

This person is someone I don’t know!

It’s kind of like when you get a cold call that starts with “May I speak to the homeowner”? You immediately thin slice the person on the other end and try to elegantly move on.

A simple fix for this is scrolling down to their LinkedIn recommendations where their peers and colleagues often address them by the name they use everyday:

But what do his friends and colleagues really call him... 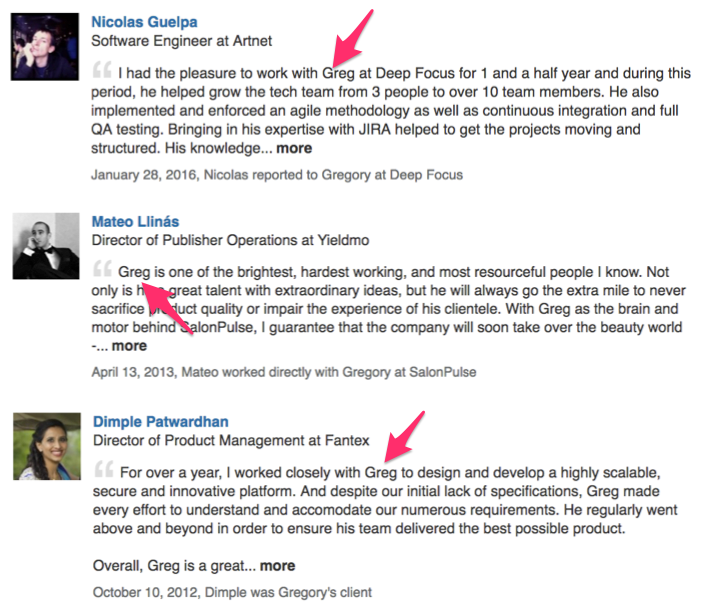 This quick check is  much easier to perform when taking a more account based sales development approach...but there are ways to mitigate this sales communication faux pas in larger SDR campaigns.

A very simple exercise is to keep a running list of commonly abbreviated names and then have an outsourced lead generation team QA the profiles of those leads in order to make sure you aren’t calling anyone by their roll call name.

Click Here To Get A Cheatsheet Of Commonly Abbreviated Names

In the past, sales communication was only about adding a link back to the website and writing a standard static text. Nowadays, however, things are evolving tremendously. It is not only possible to track links back to the website and score the level of engagement of the leads (SalesWings), but also compose a personalized text as well as include compelling images in it. This can span from gifs that demonstrate product functionality to charts charts that act as a billboard for your value proposition that’s impossible to miss.

I can’t tell you how many times someone whose been radio silent has responded to me immediately when I’ve included a compelling image in an email vs. standard static text.

Unbeknownst to many sellers, a lot of times these images don’t actually get rendered in the recipient's inbox.

This is because many email service providers, including Gmail, can’t always render the image unless it is publicly hosted vs. just an image you are pulling from a folder on your computer.

As a result, even though the image displays when you’re composing the image, the person you’re emailing will get something like this:

The easiest way to make sure this doesn’t happen is to copy and paste any image you’re sending to a Google Doc and then repaste the image from the Google Doc into your email.

I keep a Google Doc named “Gmail Images” where I host all my images that I include in emails so it’s easy to keep in once place.

So long as you’re using this methodology you can be confident that you won’t run into issues. Although, it’s never a bad idea to send a few test emails to members of your team when you’re trying a new campaign just to make sure.

I’d say the contents of about 1/3 of my external facing emails are asking people to complete some sort request.

“Did you get a chance to review that redline?”

“Can you send that Scala engineer you mentioned a note for me?”

Requests like this often receive replies that allude to completion of the action at some point in the future.

“Setting a reminder to email them tomorrow morning.”

At this point you’re in follow through purgatory; all you can do is wait, hoping that this person will actually do what they said they would.

One sales communication mistake I often see here is people following up immediately with a thank you or acknowledgement alluding to their future compliance.

The reality is that many people just don’t follow through. What follows is some pestering until they actually come through....less than ideal.

In my experience, a more effective approach is to time the acknowledgement email reply to coincide with their proposed time frame for following through.

For example, if they say “I’ll do it later today,” I’ll Boomerang that email to return to my inbox the following morning and save the “thanks” until I’ve given them time to be congruent with their time frame.

If they haven’t  followed through when they alluded that they would, the acknowledgement email serves as a gentle nudge for compliance.

“in the next few days”  → acknowledgement email two days later

If someone says something like “next week” or “in a month”, using this tactic probably doesn’t make sense. In fact, it can make you look aloof. So you can just shoot them a note pretty immediately saying something like the following:

“Thanks! If I don’t hear from you after a [insert proposed time window], I’ll ping you.”

Your messaging should be aimed at keeping them on the hook to be congruent with what they said. This can be a very powerful force.

How many times have you gotten an email that looks like this?

Do you even format bro? This is just JV laziness.

I’ve yet to encounter someone who prefers knowing they’re part of a bulk email campaign vs. receiving a genuine personal email. Few things make it more obvious than a formatting blunder like the one above.

If you’re going to do a bunch of copy and pasting, make sure to use the remove formatting function in Gmail.

After this, I'd send yourself a test email to another address just to make sure. It’s worth the extra 30 seconds of time.

After you’ve verified that you’re not using jacked up formatting, you can save the template for quick recall with an email templating tool. I personally like Snippets from Streak because its free and has hotkey functionality.

Want the exact email scripts I keep handy with snippets for situations like breakup emails, customer feedback requests, meeting requests when you're busy, and when someone asks for use cases of your product?

Click Here For My 10 Most Commonly Used Email Script Templates

Not Calibrating Communication With Responsiveness

People have been making a big fuss about social selling for awhile. Rightfully so, as these days the people you’re interacting with live across a host of mediums from email and SMS, to twitter and LinkedIn.

A common sales communication mistake I see all the time is failure to calibrate where people are most responsive after some initial dialogue.

I’ve been having someone continuously hit me up on Facebook Messenger every time they want to chat, yet I suck on FB Messenger. I’ve indicated  three times I'm slow there and redirected the conversation over email…yet they keep deciding to try and communicate with over FB.

Once you’ve started to interact with someone across more than one medium, you want to pay close attention to their responsiveness across each and focus communication where they are most responsive.

BTW, this doesn’t only occur with external sales communication. I was with a sales manager a few days ago who said that if someone wants an immediate answer from him, his reps know to ping him on Slack vs. email.

"I’m just way more responsive in Slack than my inbox, which is always a mess."

If you aren’t getting the level of responsiveness you want from someone and maybe have only tried communicating with them in one channel, try hitting them up somewhere else. Over the years, I’ve had a lot of success tweeting at people who won’t get back to me over email.

At Troops, we’ve been working on a way to keep track of when you last contacted someone over email.

Want to learn more about our Slackbot? Click the image below to join our beta: 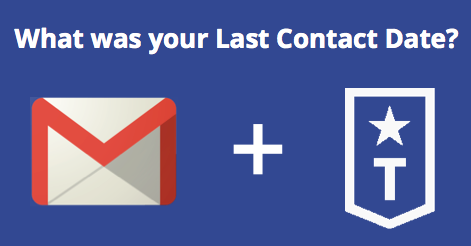 The Request For Intro Vs. Blurb

Anytime you’re trying to get to someone you don’t know, a warm intro is always your best bet for success.

The best way to broach an email introduction is the method that requires the least amount of friction possible for the person you’re asking to make the intro.

In my experience, sending a forwardable request for intro is by far and away the easiest. All the person has to do is press forward and maybe add a sentence or two and they’re done.

However, a lot of people send over a blurb or description for the request instead of a fresh email they can forward.

This may be nit-picky, but sending a blurb is definitely more of a pain for the person you are requesting an intro from.

The sender has to compose a new email, subject line, frame the blurb…see how this is more work? As a rule of thumb, the easier you make something to do, the  higher likelihood someone will do it.

That being said, here is an ideal ask for intro flow.

All of the sales communication mistakes above can be easily avoided with acute awareness and attention to detail. They may seem like “small things”, but the best of the best do all the little things right. That’s how you become great. [Click to tweet!]

The goal of this post was to foster greater awareness around some common sales communication mistakes so we all can avoid them in the future!

What common blunders have you seen that you make a conscious effort to avoid? Let us know in the comments. We’ll send whoever gives the best example a fancy Troops tee!

How to Get Your Sales Team Using Slack