The head of sales for a well-known, global company hit a major roadblock in summer 2017. He wanted his sales team to grow. At the time, he had around 125 reps on his team.

Once a year, this company evaluates budgets and makes staffing-level decisions for the coming year. Those decisions are heavily influenced by revenue forecasting reports pulled from the company’s Salesforce account.

Unfortunately, like many sales teams, this company’s sales reps were chronically bad about keeping Salesforce updated.

For example, over 1,000 of their close dates in Salesforce were flagged as ‘overdue’ (about ⅕ of all the leads in their pipeline) in the summer of 2017. Those records weren’t current when the finance team started allocating new staff positions for the coming year.

As a result, the sales manager—who had wanted to add significant numbers of new salespeople to his team—was allocated 20 fewer sales positions than he had hoped to receive for his team.

As he learned after digging into the records, it wasn’t that his team wasn’t producing well. The reps just weren’t updating their Salesforce records!

In 2018, it’s a completely different picture. Managers don’t have to hound reps nearly as much as before about record keeping, and reps are better than ever about updating Salesforce.

Because of Salesforce automation, which the company now uses to:

Here’s how it all went down (and how you can imitate their success).

Note: Want to see how Salesforce automation can improve accuracy and workflow efficiency for your sales team? Try Troops today for free.

The Goal: Improve Forecast Accuracy by 20% in Two Months

Hounding reps to update records was a waste of managers’ time and unpleasant for both parties. The company was looking for a way to:

In August 2017, the sales team conducted a two-month test. They had an internal forecasting score to gauge record keeping accuracy—based largely on when a record had been updated and whether or not it was listed as “overdue.”

Their goal was to improve that score by 20%.

A good score came from things like accurate close dates and stages; the score was lowered when there was inactivity or a next step date in the past.

Since close dates are a projection for when a deal should turn into a customer, it should never be in the past if a deal hasn’t been closed. If it is, that’s a good indication that a rep hasn’t been updating that lead in Salesforce. Likewise, a stage was flagged as inaccurate after it remained static for too long.

For some reps, updating close dates, stages, next steps, and meeting details directly in Salesforce can be a little… tedious.

If you already use Salesforce, you know that to update a record, a rep has to log in, find the record, open it, then make changes.

It seems like a very straightforward process—a few minutes to update one record. If you have multiple records to update, it’s probably a 10-20 minute task.

Yet, for some reason, many reps struggle to keep their records up-to-date. This problem expands as the number of records your team needs to manage increases. In the case of this company, it was the reason so many of their records were not current and accurate.

For this sales team, Slack was an app the managers knew the reps enjoyed and used constantly.

For the salesforce automation to be successful, they had to make updates easy and fun while shifting the burden of reminders away from managers.

For the pilot, the team rolled out Troops Salesforce automation capabilities to two teams of twenty-five reps. Slack chatbots would remind representatives of tasks automatically—while allowing them to update stages and close dates straight from Slack.

Overdue close dates? Press a button to push them forward.

Haven’t moved forward with a deal in the last seven days? Reps would get a reminder in Slack and could update the stage, set up a to-do, or get in touch with the lead—all without leaving Slack. 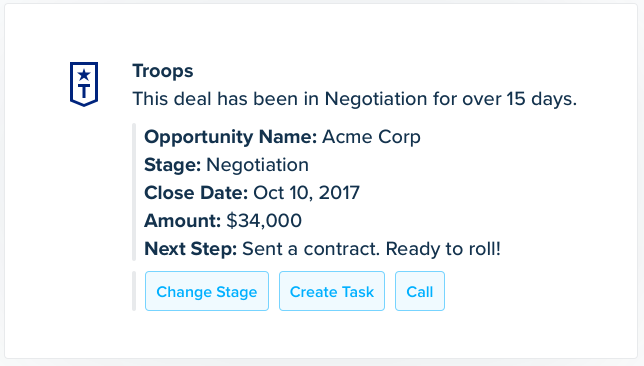 Each reminder came with a button selection to make the change. Results were then updated automatically in Salesforce. Essentially, a 15-20 minute process that sales reps hated was distilled down to 1-2 minutes.

The goal of improving records by 20%?

The team hit that mark in the first month after starting to use Troops.

After seeing how much better reps were about updating records through using Salesforce automation with Troops, managers decided to do a company-wide rollout.

After the pilot period ended, the company rolled out Troops to every member of the sales team. Throughout implementation, it was clear that the sales reps and their managers were equally excited.

Reps liked that the Troops proactive and offered simple solutions for every near-due task.

Instead of opening Salesforce and clicking through page after page to update records and opportunities, they’re done in a minute or two. That allows them to focus on their primary goal: closing more deals.

As for the managers, it was a weight off their shoulders. Hounding sales reps felt more like babysitting than managing. Now, they can devote their time to more important matters and ensure that their reps have what they need to make each sale.

The increased accuracy of the records in Salesforce means they’ll have a more accurate financial project to show finance this fall when staffing decisions are being considered for 2019.

This year, they hope, they believe they’ll be able to aggressively hire salespeople to promote company-wide growth based on the improved forecasting data they now have in Salesforce.

Note: Want to try the same Salesforce automation that helped this company improve record accuracy by 20%? Sign up for a free trial of Troops. 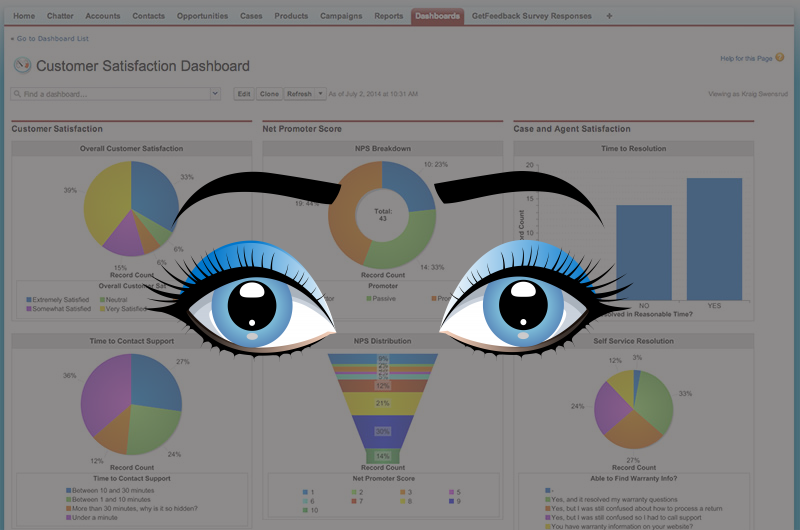 How Honor transformed field sales with a simple hack