Periscope Data had always been a Slack-forward company, and realized that giving their team the flexibility to consume critical buying signals in Slack meant they would take action quickly. They had worked hard to drive lead response times down with a custom-built system designed to maximize visibility.

After making changes to the team’s lead routing configuration, it became apparent that their home-grown solution would no longer be usable without significant re-work, and the ongoing cost to support was high. For Periscope, given they needed to find a solution, it made sense to compare the cost to rebuild and support their own tool to finding and implementing a third-party solution.

After evaluating options, Troops was the obvious choice

When comparing the internal cost of developer resources to paying for an easy-to-use tool that would support Salesforce changes and had powerful configuration options, it became clear that they needed to try and look for a dedicated solution. Lisa and Holly, two of Periscope’s Sales Operations team members, did their research and spoke with a few different companies that they thought would be able to recreate their workflow in Slack. Other solutions were cost prohibitive and did not offer the functionality and customization they needed. They had already been using Troops to celebrate team wins in Slack, and it became apparent quickly that Troops would give them the functionality and flexibility they needed to implement new workflows. 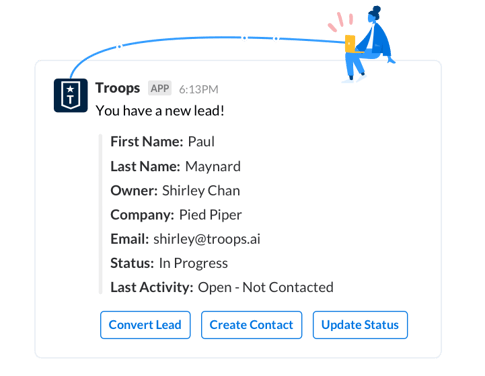 With Troops, Periscope can route leads to channels or lead owners directly

Lead response times improved dramatically, and additional use cases have been set up

Along with an internal push to better lead responsiveness, bringing Troops into the team saw a huge improvement in first-touch time - from 2 hours to under 40 minutes. Reps have leads dynamically routed directly to them real-time so they know exactly who they need to reach out to and can increase the number of converted prospects per rep. In addition to helping with top-of-funnel, Troops has now been set up to tackle other pivotal moments during the sales cycle, including automated workflows to improve pipeline cleanliness and celebrating ADR qualified opportunities.

Julie is the CMO at Troops, Inc.