How to use Slack's threading to power up your Sales team 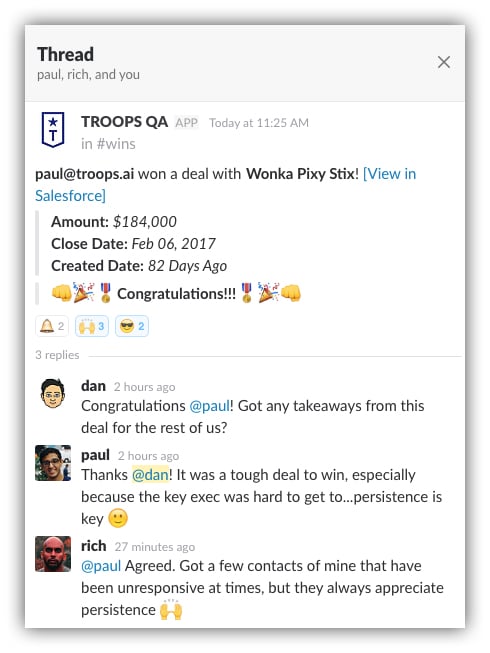 Not too long ago Slack released a new feature called Threading.

Some people understood the value immediately and began inserting it into their workflow to optimize their sales and customer facing teams’ workflow.

Many others still have no idea what it is or how it can help optimize the way you share and collaborate around information:

By the end of this post, you’ll understand what threading is, why you should use it, and a few examples of how you can start implementing threading in your workflow immediately.

So tell me more about Threading…

Threading allows you to create micro-conversations around specific messages.

The benefit is that you’re now able to silo a new conversation around a particular event without blowing up a channel. They’re also great for organizing these conversations in one place for future search and recall.

Instead of having my sidebar conversation in the middle of a Slack channel, the thread allows us to create a dedicated space for that conversation that doesn’t disturb everyone else.

Try starting a thread in your Slack right now by hovering over the top right of a message and clicking the middle module. 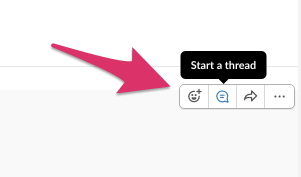 A Tale of Two Sales Teams

At the core, a thread is like an email chain.

In the old world, you might have an email that is triggered every time something happens in Salesforce like when someone closes a deal.

Without fail, 16 people cc’d on the email now have their inbox blown up, and for 18 hours there is a chain of obligatory reply-alls from everyone on the team.

A massive thread being inserted in the same place you’re trying to be responsive to customers can be incredibly distracting.

Where this gets increasingly interesting is when we start to think about information recall for existing and future team members.

Let’s say one of these trigger emails inspires a discussion on the chain where a teammate shares tribal knowledge. In this specific example, maybe a VP of Sales asks employee John what were the most important things he did to close the deal.

John responds, more people rah-rah, and then this thread gets archived.

Two months later when John’s teammate Susan wants to remember what John did, she spends 4 minutes in her inbox trying to find the archived email.

She finds the process annoying, but this is how they’ve always done it. Susan endures the struggle and finds the thread.

What’s perhaps a bit more alarming for this organization is that when they onboard classes of 5-10 reps every 3 months, none of the new reps are privy to these threads and the subsequent learning

2) A New World With Slack Threads

Let’s take a look at another company. We’ll call it Axe Capital.

They decide that they want to silo and organize notifications and reporting to Slack, while reserving their inbox for external communication.

Axe has set up a variety of channels that are organized by context and teams, and subsequently routed the appropriate notifications from Salesforce into the corresponding channels.

Two example channels they’ve set up are #wins to celebrate when they close deals and #sdrs for their sales development team.

In this world, they have a dedicated space for engagement & conversation around appropriate workflow.

Let’s look at where threading plays a role.

Every time a someone closes a deal, they’ve set up a closed-won notification to display the event along with key information on the opportunity in Slack.

They leverage threading to drive conversation and create a searchable, historical record around each deal (see right pane).

Anytime an Axe executive wants to learn about new customers, and why deals are closing, they can get all of this information in one place while in an Uber home from work.

At the same time, they give new AEs a homework assignment during their onboarding to review the past month of Closed Won’s to learn more about the hot buttons of recent customers. Because it’s pretty simple, they can do this on their phone while they eat lunch at their desk.

The SDR channel is a bit different than the wins channel. Yes, they have a SDR celebration gong for when they create opportunities, but they also have reporting scheduled daily to keep them accountable to good process.

One example of that is their stale leads report they’ve set up using Troops.

Because this report is front and center for the entire team to see, reps are much better at following up within 24 hours, as well as manually changing the status in Salesforce so their name doesn’t get called out on their Slack “you’re being lazy” scoreboard.

But when there are stale lead slip-ups, SDR managers use threading to drive a conversation around what is happening in each instance of a lead not being touched in the appropriate time period.

Axe Capital not only benefits from this workflow because it limits unnecessary clutter in their inboxes, but also because people are more responsive in Slack than email...even if those responses are emoji clicks to make their teammates feel good

Perhaps most importantly, the enhanced organization of both trigger events and ensuing conversation increases the collective intelligence of the company for both current and future employees.

This is cool. When should I use threading?

To summarize, there are lots of times when threading makes sense. To name a few:

I’m sure there are many more, but these are the most obvious.

Since the introduction of threading, we’ve seen a ton of companies migrate email workflow into Slack for the reasons described above.

If you’re using Troops, we suggest experimenting with threading around:

The main benefit from talking to a few companies is exactly what we suggested in our stories above...less clutter, and better organization of information that increases the intelligence of organizations.

Anytime you want to drive a new behavior inside your company, there needs to be a champion...

The first thing I suggest is configuring some of the workflow above that will act as the “catalysts” for threading.

If you’ve already done that, then I suggest you start using threading for the appropriate instances...and make sure you tag people with the @ symbol!

If you’re a leader at your company, you can also just share with your team how to do this in your weekly meeting, and suggest that moving forward you would like people to leverage threading for conversations around specific workflow.

Here’s my thread for you…

So I’m curious, do you use threading? If so, in what context?

If you don’t, in what context would this be most interesting for you?

How To Build A Lead Follow Up Machine On Slack

Breakout Sales Startups in 2017 (our predictions)